Like I said at the end of my initial Old Crow review, I placed another order that same day (the 14th) and it arrived on the 5th, 20 days later - two days faster than my first order.

The packaging is again commendable, with each vehicle individually bagged and the entire batch encased in bubble wrap and packing peanuts. 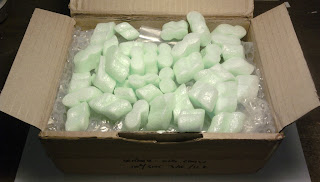 Going roughly from smallest to largest, let's start with the Goanna Scouts. These come two per pack and are really nice sculpts, especially for single-piece models, but I would prefer separate wheels. I feel the block of resin that extends to the floor is a bit too much of a compromise, simplifying casting at the expense of aesthetics. 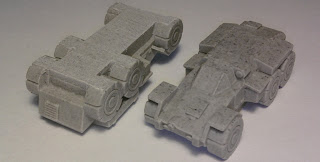 As with all Old Crow models, the underside is sanded flat, but unfortunately one of the Goannas does not lie level with the ground, looking perhaps is if the tires on one side were flat. Apart from that, the casting itself is every bit as flawless as I came to expect.

Second come the Outrider scouts. I opted for the grav version but Old Crow also offer them with hover-skirts or wheels. I was pleased to note that each vehicle comes with a choice of gun turret, missile turret or access hatch. This leaves me with some spares for the Goannas (which come unarmed).

Sadly the sanding is again uneven, as can be seen on the following image. Note the different thickness in the grav "flaps" on the two vehicles.

Next up are the Trojan APCs. These look very much like Slingshots but come with single-piece hulls and yet more spare turrets.

Unfortunately the casting on these is considerably worse than the other Old Crow models I've seen. The underside of one vehicle is absolutely pitted with bubbles and a fair few smaller ones extend to the sides of the hull, as well. Looking at this model reminds me strongly of GW's ironically named "Finecast" range.

Well, moving on to the Gladius grav tanks. Their hulls come in an upper and lower half, but unlike the Slingshot the pieces are not joined with the sanded sides, instead the sanded side of the upper hull goes on the smooth side of the bottom piece.

The bottom halves aren't cast perfectly flat, so there is a bit of a gap at the join. Since the piece is fairly thin, this can probably be easily fixed with a little heat-bending.

With the addition of a standard tank turret the Gladius makes for a really nice grav tank. 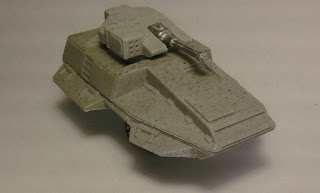 The Glaive APC is based on the same shape as the Gladius and uses identical lower hull pieces. Again, those are a bit warped. The Gladius comes with yet more spare turrets.

At this point I finally remembered to place an infantryman  in the shots to give a sense of scale. The Gladius is really chunky and looks like it could fit 10-12 soldiers in full gear quite comfortably.

The Sabre heavy tank comes in one piece plus turret. Its turret is much larger than the others and is the only one not compatible with the rest of the range.

The details are good and the sanding seems fairly level here. The hull is cast well but the turret has one huge bubble up front. 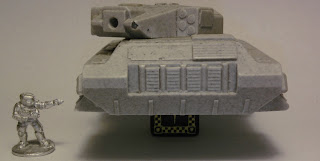 Once that is filled, the Sabre will make a really impressive main battle tank. I really will have to pick up a few more.

One thing to note about all these grav vehicles is that, with their bottoms being sanded flat, you are left completely to your own devices if you wish to mount the vehicles on any sort of stand or base. 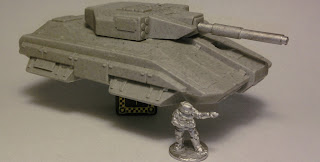 After all these one- or two-part hulls I was quite surprised to find that the Lancer APC comes in 7 parts.

The top and bottom hull piece join with their sanded faces. The bottom piece is hollow, probably to save on resin, or perhaps so that an upside-down Lancer can double as a jacuzzi. The bottom hull is a little smaller than the top and I'm not sure whether this is due to uneven shrinkage or perhaps intentional. 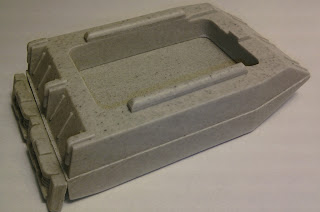 The armoured panels attach to the sides, but came noticeably warped. The curvature is very obvious in this top-down picture. To compound the problem, the warping happened before the back was sanded flat, so if I bend the panels so that the detailed side becomes flat, the sanded side will curve. The Lancer is definitely  the "expert level" kit of this batch much like the Crow Lander was in my previous order.

(Update: assembling the Lancer was actually easier than expected)

I also got a "Comcen" turret for the Lancer. It has a simple but effective design, with a chunky support structure and a simple dish. 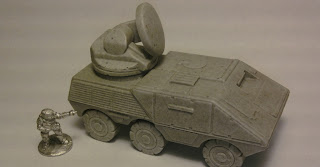 Lastly, Old Crow threw in a hand-signed note and two infantrymen as a freebie. These compare favourably to GZG's New Israeli (far left). The detail is considerably sharper and the metal looks to be of higher quality. Unfortunately the mold lines as every bit as heavy as GZG's.

And here is everything an hour later, after being scrubbed in detergent to remove any release agent. The parts did not feel at all greasy and it's possible that this step was unnecessary, but it's always better to err on the side of caution. You only need to see the paint peel off one model to never risk it again.

Based on this batch, I'm afraid I have to dock Old Crow a point in Casting (down to 9/10) as there were some quality control issues (uneven sanding, excessive bubbles on one vehicle) but so far these are still the exception and for the most part the casting remains well above average for resin models and I will happily place another order with Old Crow very soon.