Like a lot of 15mm players I try to keep an eye out for interesting toys and scale kits that could be used for gaming. Browsing stores like Hobby Link Japan can turn up some really interesting finds. If you're not averse to the sleek anime-look or most of their models, you can find a plethora of mecha in various scales, including our own 1/100, and sometimes other types of models.

A few weeks ago I stumbled upon a selection of 1/100 scale jets. Apparently they come from a series called Macross and transform between jets, jets with legs and normal-looking mecha, but these particular kits are "stuck" in jet mode.

Now, there are two obvious issues with aircraft in 15mm. Firstly, they're a fair bit bigger than tanks and can overshadow the rest of the models. Some games (like Flames of War) get around this problem by using undersized aircraft, but this just feels weird to me. Second, at 15mm scale the table still represents such a small area of ground that it would be unrealistic for a fixed-wing craft to stay on the table for any length of time. Knowing this, I still decided to buy a kit and see for myself. The one I opted for is cheap enough and looks good enough that I wouldn't be too sorry if it turned out to be useless for 15mm and had to be relegated to the display cabinet.

Using HLJ's cheapest "it ships when it ships" option I had to wait a little bit over a month to get my order. 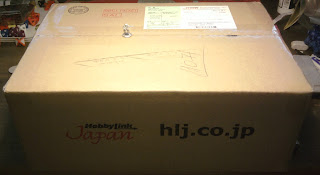 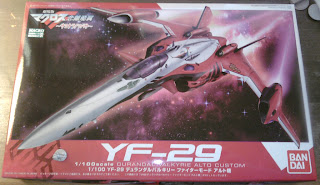 The box contains 3 sprues, an instruction sheet in Japanese (but illustrated well enough that assembling the model was completely unproblematic) and a large sheet of stickers. 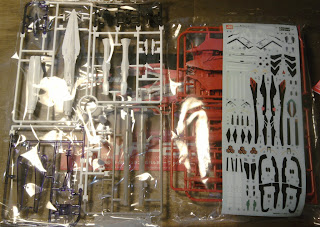 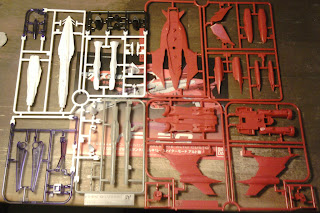 Bandai uses some serious wizardry to make multi-coloured sprues in a single mold. Combined with the sticker sheet, this means that the model can be displayed as an anime memorabilia piece without any painting. A serious modeler or gamer will still want to paint it properly, though. Similarly impressive is that the model snaps together without any glue and all the parts fit perfectly. 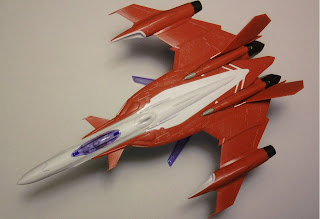 Despite being advertised as 1/100 scale, the pilot is a fair bit smaller than my 15mm GZG infantry, even accounting for the New Israeli's hardsuit. If I decide to use the jet for gaming, I'll have to paint over the cockpit to hide the little man. 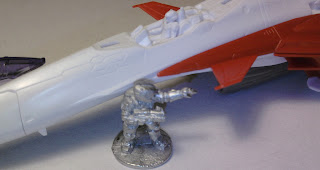 And a size comparison with an Old Crow Sabre, which is one of their heavier tanks.The size difference is realistic enough, and I don't think that a single jet would look too off on the table, size-wise. As for the other issue... well, in a world where grav tech exists, it cannot imagine that it wouldn't be used on jets, at least as a secondary system to provide easy VTOL and a safety net in case the main engine dies. This would make every jet capable of hovering and providing fire support for ground troops in the same way helicopters can today. 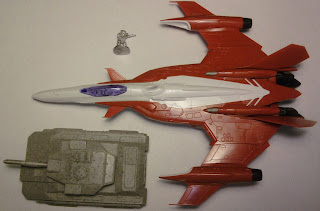 Even if your setting does not allow you to hand-wave these issues away with grav tech, the model still makes a fine terrain piece or objective, or can be used as an "instant death" ending in scenarios (you have to complete your mission before the jet arrives and bombs your forces).

I would not recommend it to everyone, but if you like the design aesthetic you might want to give it a shot. It cost me a about $20 US with shipping from Japan, which is a competitive price even compared to lower-quality local offerings (Revell, Italeri...)