Looks like it's time to review some more goodies from Japan. Here we have two ridiculously cheap plastic mecha kits, a Gernsback and Falke from the anime Full Metal Panic. At this price, I wasn't expecting much, so I was pleasantly surprised. 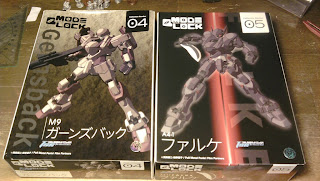 Box contents are minimalistic. Each kit consists of two monochrome sprues and a tiny (but sufficient) one-sided instruction sheet. No stickers or decals, no stand. 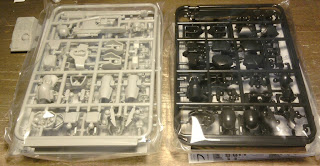 Ball joints, ball joints everywhere! There are about 4 pieces that attach with a hole-and-peg system, everything else goes together with ball joints, even pieces that are not supposed to move (like the barrel of the giant rifle). There are even ball joints on the sprue (see the centre of the sprue on the right) - at first I thought they put them there as a joke, but actually you are supposed to cut up the sprue itself to create a stand for the model. The great part about all these ball joints is that the model goes together without any glue at all and is fully poseable. 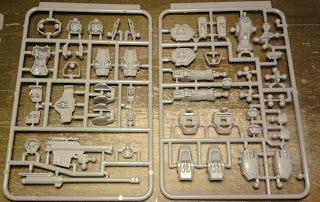 The last time I ordered a kit from Japan I was astounded to see multicoloured sprues. The Japanese are apparently determined to challenge all the common misconceptions we have about plastic injection molding, so this kit has undercuts. Loads of undercuts. They're slight and can't really be made out on the picture, but take my word for it (or just think about how a ball joint works for a moment).

Assembling the kits is a snap (ha ha!) They did end up being a bit bigger than I expected, so I'm not sure if I want to use them. They will certainly require some more sensible weaponry (the Falke actually comes with just a sword...) 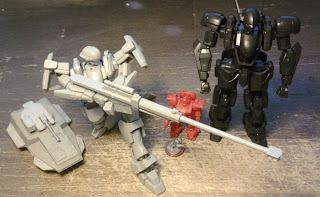 Also, some of the bigger pieces are hollow and open at the back, as can be seen here. If I wanted the models "done right" I would have to fill those in or cover them with additional armour plates. 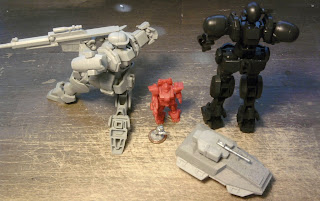 The good part of these kits is certainly the poseability and the slightly more down-to-earth design than some of the other anime mecha. The Gernsback in particular doesn't look too bad alongside the Old Crow grav vehicles (and not just because they're both unpainted grey) but the size could be an issue. The mecha are probably about twice the volume of a battle tank. For the moment, my verdict for these kits is "undecided".