Now here's something really different. It got posted on Dakkadakka in a discussion about Russian plastics and immediately drew my eye. Apparently it used to be sold as part of Zvezda's now defunct sci-fi game line (whose name Google translates to "Starship Troopers", amusingly enough.)

It took hours of searching and Google translating but I finally managed to obtain one from an online shop in Ukraine (yes, it looks like I snagged the last one in stock... sorry). This was my first Zvezda kit, but they have a reputation for high quality historical models, so I wasn't worried in that regard. I knew the reputation was justified the moment I opened the box, as even the packaging is top-notch. The sprues come bagged and bubble wrapped inside the box, and even the instruction sheet comes in its own little A5 binder sleeve. 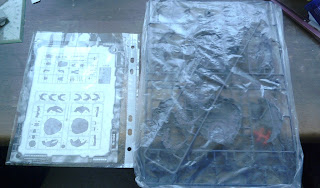 The crab comes in two large sprues and one small sprue for the legs. It also comes with 5 small, red pegs that I assume are wound markers. The size of the beast is very impressive in 15mm scale, rivaling Old Crow's heaviest tanks. 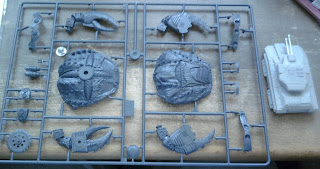 The sprues also contain an optional manned turret. I would guess that the gunner is roughly 35-40mm scale, considerably bigger than GW's "heroic" 28mm infantry. Luckily a bit is provided to plug the turret mount, and the crab itself has absolutely no scale-dependent detail. Of course, it is also large enough to carry any 15mm scale turret you might have lying around... And here it is in all its unpainted glory. This is a superbly detailed model that will rival any metal or resin cast from the usual 15mm peddlers. If you want to run any sort of sci-fi biotech faction, the Beast is a must-have. Just hurry up, as unfortunately Zvezda has abandoned this product line (which contained many other gems) so once they're gone, they're gone. 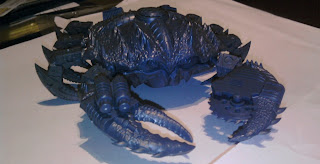 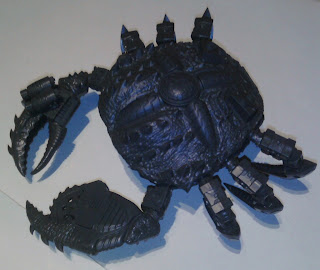