Hi, it's been a while. Waiting for my latest Old Crow order really drained my enthusiasm - it took no less than 5 weeks this time. But now it's finally here and I can pore over some more cool models! 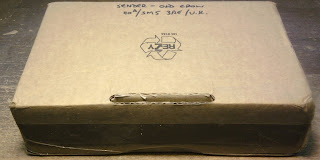 Starting with the sculpts we've already seen, here is my second Sabre. A great cast with no bubbles this time.

Two more Gladius tanks, this time with "tank hunter" turrets. I wasn't too impressed with the design of these turrets from the pictures on the website, but they are really nice in person.

Gecko scouts, pick-up version. One of them has two bubbles on the underside, the other one is perfect. The rear compartment fits a (unbased) GZG guy perfectly.

Halberd assault guns. Neat design with two barrel options (the same as on the Sabre, I think) and a metal top hatch. This could probably be replaced with one of the tiny turrets that come with Old Crow's APCs. The hull consists of two parts, with the bottom being the same as on the Glaive and Gladius.

I also wanted to try some if the fancier turrets that don't come with any tanks and have to be purchased separately, so I got two "Tac Missile" turrets. These come as a resin sensor array with 4 impressively large missiles cast in metal (with barely a mold line to be seen!) Mounting these on a Gladius chassis makes for a pretty interesting support platform.

Since I now had two extra turrets, I also got two immobile turret bases. They look nice and chunky and will make a nice addition to my forces when they have to defend a static position.

There we go. Another batch of great casts (I'd say maybe 8 bubbles in this whole lot combined, and nothing in critical places) from Old Crow. I own almost their entire 15mm catalogue now, so I guess I'm done until they make some new stuff!

That's it for now. Thanks for reading and happy gaming.