It's finally time to take a look at Ground Zero Games, the closest thing the 15mm sci-fi scene has to an all-inclusive hobby company. GZG offer a (somewhat aged, but still solid and reasonably popular) 15mm ruleset called Stargrunt II as a free pdf download. They also have a very comprehensive range of figures - I count about 13 different factions in the infantry section as well as a wide selection of generic models, although I would say only 3 factions really have a full range of poses and armament so far (UNSC, NAC and New Israelis). GZG's vehicles aren't really arranged by faction, but they do come in several different, easily distinguishable visual styles, so it is quite possible to create distinct forces.

To be perfectly honest, this is my second order with GZG - the first time I was too excited to take photos as I went along, and I knew I would be making another order soon to round out my force, anyway.


Making an order is very easy. GZG run an online store with proper software, which is sadly still a rarity in the 15mm market. However, keeping with another 15mm tradition, they are extremely stingy with their pictures. Their 15mm vehicle range is well covered, but the infantry pictures are so small as to be just about useless. Some other sections (a lot of the 25mm and 6mm ranges) don't have any pictures at all. I'm probably not the only one who refuses to blind buy, so GZG really should get their act together here.

GZG's international shipping rates are a fair bit above standard. High enough that they would be a deal-breaker for me if the 15mm market were just a little bit larger. A lot of it is down to them insisting on recorded delivery, which is a costly service when shipping internationally. On the upside, my order shipped lightning-fast. I placed it on the 24th in the early morning and received a dispatch notice not 4 hours later. The package followed 4 days later, which must be a new record for UK air mail. 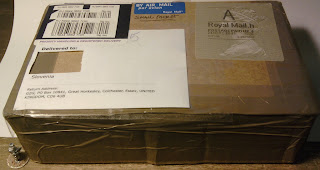 Every set is individually bagged and the lot is then bubble-wrapped for additional safety. This works well for the most part but I wish some additional protection would be provided for some figures with long, very thin metal gun barrels. There were no breakages or significant bending this time, but with the weight of the lead alloy models and the thinness of the barrels, I could easily see them being damaged.

So here we have some New Israelis. The first picture shows a unit of infantry in Hardsuits (same models front and back) although I cannot for the life of me tell how these are any different from any other New Israeli infantry. It's hard to see on the official pic, but you get a guy with a shoulder-mounted weapon of some kind, one guy with a heavy energy weapon, a leader-type, and 5 grunts.

The next picture shows the units, a Rifle pack A and a  Command & Comms pack. Now, keep in mind that these are the only 15mm sci-fi figures I've ever seen in person, and I never paid much attention to the Flames of War models that are popular in my game store, but I'm not very impressed with the sculpting and casting. I think the detail is very soft for its size, and the figures often look a bit "squished" - I don't know whether this is due to poor sculpting or sloppy handling of molds during casting. There is also significant flash present on some figures. See the neck of the guy on the far right of the top row here, and the head of the third guy in the bottom row.

Moving on, here are a pack of Mortar teams and Gauss MG teams. These are all pretty nice.

Besides a load of infantry (9 packs total) I also got some drones. The wheeled missile drones here will supplement my existing autocannon and sensor drones. The casting looks nice from the front, but a look at the backside reveals heavy disfigurement of the rear wheels, probably where the injection ports are. This was the same on my first two batches of drones, so it's probably not an anomaly. It's not too difficult to fix them up, but not exactly my idea of well-spent hobby time.

The spider drones are much better casts and really have no issues apart from plenty of mold lines, but that's to be expected given their complex shape.

Speaking of mold lines, there is a huge gripe I have with GZG's figures. Two sets of mold lines on one figure! You can see this on the super close-up below. The first picture is raw, the second shows where the lines are. The third guy has three mold lines crossing on his head, although you'll have to take my word for it as he's a bit out of focus.

And the same deal here. Four mold lines on each leg! WHYYYYYY? My guess is this: To make some specialists, GZG cast up some basic figures, chopped off their guns and sculpted new ones. This is okay, most manufacturers do it. Even GW used to recycle sculpts all the time back before they shifted to sculpting on the computer. However, I don't recall a single case where GW forgot to remove the original's mold lines before recasting the model. This is inexcusably lazy and creates a huge amount of unnecessary work for every single customer. Shame on you, GZG.

Well, luckily I now have all the New Israelis I'll need for the foreseeable future and I'm ready to explore other companies' ranges. I might give Khurasan a try next time, I really like their Control Battalion.

So, my final ratings for GZG, using the same system I did for Old Crow:

GZG's chief advantage is their large figure range. Right now they are still the go-to guys if you want a visually coherent force, but once competing 15mm companies catch up (and they are catching up) in that department, I think GZG will have to step up in terms of quality control or reduce costs (I hear switching to resin is all the rage these days).

Am I being too harsh? Or do you agree? Let me know.